I don’t remember the message this refers to, but it was an email sent to myself (Roger Whitson) and James Fleming — among others. I’m assuming it refers to an undergraduate class that I was helping Don with in 2005. Don has one of his many Person from Porlock moments:

I had just finished writing a long and complicated note to all of you about what we’re doing tomorrow, and suddenly my entire email program crashed, so I’m just going to send you this note saying that I assume I wasn’t supposed to send you such a note.

I look forward to seeing you tomorrow, when I hope I’ll be able to tell you basically what I was trying to say in the note that disappeared, as if by magic or demonic possession, or something.

Rather than trying to introduce himself to a class at the beginning of a semester, Don often let prior students do the honors. Here are a few comments culled from student evaluations that he liked to share with newcomers.

“I found Ault’s ‘chaotic method’ to be entirely conducive to learning. His enthusiasm and respect for students/learning/synthesis-of-ideas made this course challenging and beneficial.”

“There was one day in particular when I had a breakthrough in here (usually things would ‘click’ about one hour into class—right about when I was about to cry from trying to hold onto all those abstract theorems, etc.). You were lecturing on Eco and I felt as though the puzzle had come together—if for no other reason, it was all worth it for that moment.”

“It gets a little frenzied, but Dr. Ault takes his technical glitches in his stride.”

“To say that Ault is a ‘good’ teacher would be to fall into the binary trap that Derrida warns us of. Instead, I would like to say that Ault just is.”

“Ault’s stream of consciousness teaches less about comics and forms of narrative, and more about the inner workings of an eccentric genius.”

“The ideas flow into the classroom like a hurricane but rest lightly at the end.”

“He sways when he speaks, I noticed, which makes me nauseous. I cannot look at him.”

“He is so scatterbrained that he can’t always convey his thoughts clearly. Every time he gets in front of the class he becomes so breathless and shaky I fear he will have an aneurysm. Poor guy needs a vacation and should not be consuming any caffeine.”

“This class is great. You, Donald Ault, are great. Don’t let anyone tell you otherwise. If they do, call me. I’ll beat them up.”

“Total inability to stay on track.”

“Donald Ault is a writhing ball of insanity. I love it!”

“Somehow you can see the intelligence behind the cloud.”

“He’s unintentionally funny, but I think he realizes it.”

“He’s the kind of person you have a lot of questions to ask, but you don’t want to because you know he’ll give you an hour long answer.”

“One seldom knows if Ault is conveying vital information or off on a tangent.”

“Tending to be scatterbrained actually enhanced the environment of learning.” 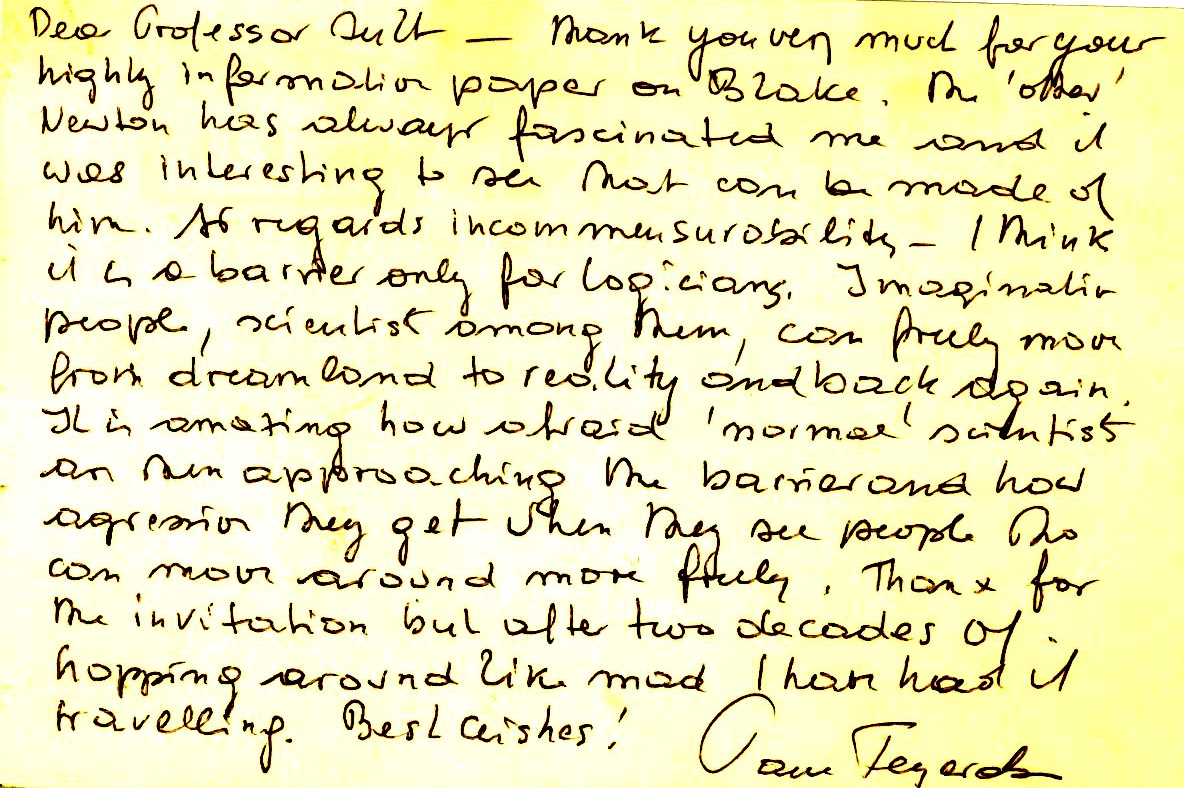 Dear Professor Ault — Thank you very much for your
highly informative paper on Blake.  The ‘other’
Newton has always fascinated me and it
was interesting to see what can be made of
him.  As regards incommensurability – I think
it is a barrier only for logicians.  Imaginative
people, scientists among them, can truly move
from dreamland to reality and back again.
It is amazing how afraid ‘normal’ scientists
are when approaching the barrier and how
aggressive they get when they see people who
can move around more freely.  Thanx
for the invitation but after two decades of
hopping around like mad I have had it
traveling.  Best wishes!  Paul Feyerabend